“Tracy Grammer is a brilliant artist and unique individual. Her

voice is distinctive, as is her mastery over the instruments
she plays.” - Joan Baez

“…but there is another revelation here: Grammer is, in her own right, among the finest singers and musicians anywhere in folkdom.” – Boston Globe 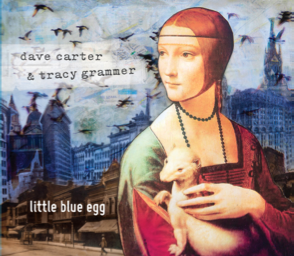 Tracy has once again served as curator and producer of the album, as well as arranged and performed on guitar, violin,
mandolin and lead vocalist on several songs. As she has
since 1998 when she and Dave recorded When I Go together
in her kitchen in Portland, Oregon, Tracy has played a
prominent role in the studio as both producer and performer.

Their unique strengths and diverse backgrounds came together in powerful synergy. Carter conjured mystical, romantic, true fictions while Grammer complemented his expert guitar, banjo, and voice with beautifully intoned violin, mandolin and emotionally potent vocals. Building on Carter’s impressive songwriting wins at Kerrville, Wildflower and Napa Valley, the duo recorded their first album, When I Go, in Grammer’s kitchen. The simple, no-frills recording garnered the unknown duo a full-page feature article in the Los Angeles Times, naming Carter “a major lyrical talent” and declaring their self-released album a “discovery of the year.”

The duo signed to Massachusetts-based label Signature Sounds in 2000 and released two chart-topping albums of what they called “postmodern, mythic American folk music.” In addition to heavy airplay across AAA, Americana and folk radio stations, the duo was highly celebrated by the press. The Boston Globe declared that “If the voice of modern folk is changing – it is going to sound a lot like Dave Carter and Tracy Grammer.” The flood of praise resulted in a full calendar of concert dates and an invitation to join folk icon Joan Baez on her spring 2002 east coast tour as both featured artists and band members.

Resuming her appearances at the most prestigious venues and festivals in the US and Canada, Tracy spent the summer of 2012 touring a presentation that marked the 10th anniversary of Dave’s passing and what would have been his 60th birthday.   Her summer dates included the 15th WUMB Folk Festival in June, the 24th Falcon Ridge Folk Festival in the Berkshires, and the August 51st Philadelphia Folk Festival.

I worked with Tracy during two different periods of her career.  When I represented she and Dave from 2000 – 2002 Tracy was emerging as a true duo partner, and by the release of their third album together, drum hat buddha, her’s was the lead voice of half of the album, and Dave was writing more for a feminine lead.  After Dave passed away, Tracy and I ended our business together, and she went on to release three more albums and two EP’s to critical acclaim and chart success.

In 2010 Tracy discovered a collection of recordings from their time together and was rescuing them and preparing to create an album.   She and I spent a year organizing her business, securing  distribution with Red House Records, marketing the recordings to the media and consumers, reconnecting with the industry, touring to promote Dave’s legacy and preparing a tribute album.  We established the Dave Carter Legacy Project in partnership with Folk Alliance International with a grant from the E Rhoda Shaten Foundation in Philadelphia.