John and I have partnered several times over the past 15 years, and I have represented him for management and marketing.  He and I  have produced several album projects together including his signing with Sliced Bread Records and his Americana-charting release, his live album recorded over two nights at the Point and his most recent record The End of the Beginning.

John and I also developed his award-winning family music career with the production of a school assembly music program and his American Library Assocciation Gold Award for the album Love Takes A Whole Box of Crayons.  John has firmly established himself as a leader and champion of the American folk and acoustic and family music scenes.  He appears each season at Citizens Bank Park singing the National Anthem for the Philadelphia Phillies, as he has done since the days of Veterans Stadium.  John tours the US through-out the year, and has shared a microphone with Kris Kristofferson, Willie Nelson, Ramblin’ Jack Elliott, Arlo Guthrie and many, many more during his career.

John has created an amaizng body of work that includes his collaborations with everyone from Dar Williams to Kris Kristofferson.  This is his most recent release which includes my favorite song, “The Giving Stone”.

John Flynn opens his new CD, The End of the Beginning (JF008 Flying Stone Music) with the lines “Like river stone, it may be that some edges get worn smooth, or maybe it’s just that these days you don’t have as much to prove”. These words seem to perfectly capture, not only the mood of the disarmingly acoustic release, but also something of the 54 year-old singer-songwriter himself. The End of the Beginning reveals Flynn as an artist and a man, comfortable in own his skin and in full command of his craft.

The album contains eleven songs by Flynn, whom Ramblin’ Jack Elliott once called the undiscovered “John Lennon of the Plasma Generation!” (Flynn admits that Mr. Elliott may have been under the influence of an enthusiasm-generating beverage at the time of this characterization.) The title song is a duet that finds Flynn reflecting on the journey, while sharing the singing chores with his long-time supporter and friend Kris Kristofferson. “A Song from the Subliminal Hymnal” is a whimsical, koan-like invitation to lateral thinking. “Crazy as Ever” is a song John wrote for Beth, his wife of 27 years.

The End of the Beginning was recorded and produced by current handyman, former TV and radio personality, and always musician, Harvey (remembered fondly throughout the Philadelphia region as “Harvey in the Morning”). Harvey sings and plays many of the instruments on the album. 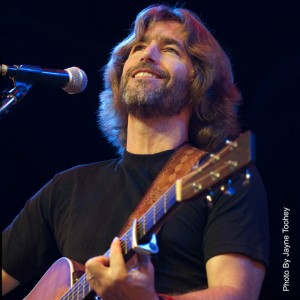