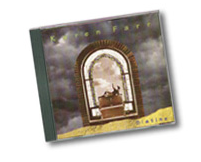 Our first management signing was Karen Farr, a Philadelphia native, who played extensively in the area. In collaboration with her husband and recording engineer, Rob Viggiano, Karen was a favorite on the folk and pop music scene for a number of years. After the Philadelphia area took notice of the band’s independently released cassette, Trouble Sleeping, Karen signed with New York’s November Records in the summer of 1992. Later that year the label released Sistine, which stands as her only national release. Achieving major airplay on many AAA/Progressive stations around the country, the band was invited to perform at many station functions, including the WBOS EarthDay Festival in front of 50,000 listeners. After retiring to start a family, Karen still plays in the area, and Rob Vig operates a booking agency, Red Phone, in Norristown.